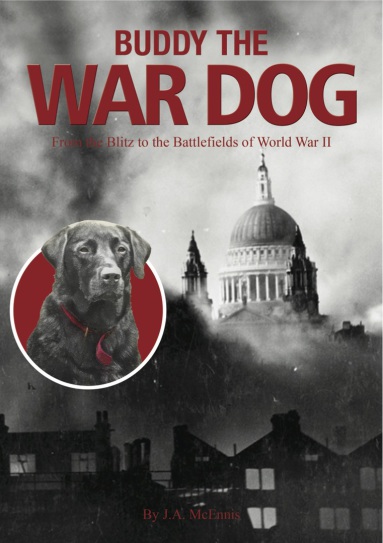 The protagonist in this novella is Buddy, a black Labrador, who is about to be put to death at the start of World War II. This was because central government instructed all pet owners to destroy their animals to save on food and air-raid shelter space. In the first week of the War, 750,000 pets were put down. Fortunately, in a touch-and-go situation, Buddy survives.

Initially, Buddy's seven-times great grandson, Bod, another black Labrador who lives in Cornwall, explains to Archie his young master how Buddy's story appeared in the War Dogs' Journal.  Written in the first 'doggie person' the book focusses on the heroic tales of Buddy during the the London Blitz and when he is parachuted behind enemy lines into France.

Huge challenges follow as suddenly his comfortable pet status ends and is replaced by the harsh realities of a soldier dog's life serving King and country.

When Hitler arrives in Paris in 1940 the capital is in turmoil with Jews being rounded up and herded onto Holocaust trains. Buddy faces an impossible mission - to track down his handler's Jewish daughter who they think is on one of the trains heading to a Nazi concentration camp. The train leaves so Buddy has to track it before it reaches its deadly destination.

The book highlights through real situations how Labradors - and other dogs - helped to save thousands of lives in World War II using their powerful senses of smell and hearing. Buddy sniffs out traitors, mines and the enemy and is even hailed as a hero by the Prime Minister, Winston Churchill.

Suitable for readers from the age of 9 years to 90 years! the book could also be helpful for pupils studying Keystage 2 history about World War 11, as real situations are brought to life in a dynamic way through the experiences of a dog soldier.  For every book sold (retail price £7.99)  £1 will be donated to The Labrador Rescue Trust charity. Details of the  extraordinary work of the Trust can be seen on their website:  www.labrador-rescue.com

We are located at:

If you have any queries or wish to make an appointment, please contact us:

To buy a book

To pay by BACS

To pay by PayPal click on Add to cart.

Get social with us