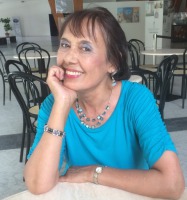 Snippets from my life

When I retired as editor of news magazines in Dorset and Hampshire I embarked on the exciting challenge of writing short story books for children and young adults. My hope is that young readers will enjoy the adventures as well as learn something along the way.

To a lot of young people I probably sound a bit ancient - but here's the thing - in my mind and body - I feel as young and energetic as I did in my 30s! This could be because of my daily yoga practice and healthy lifestyle over the last fourteen years. Before that I was leading quite a stressful life running a newspaper and magazine publishing company with my husband. Now in 2021 we are Cornish residents, mainly to be close to our grandchildren which is an abolute delight.

In 1999 an amazing opportunity came along in the form of a big adventure I'd only dreamed of achieving. A travel company in Oxford publicised a trip to Nepal to trek two thirds of the way up Everest. The timing wasn't good, but as usual,  my husband was totally supportive. He confessed it wasn't really his cup of tea - and besides - he was negotiating the sale of our business at that time. Training for the trip was intense, climbing up hills with a heavy rucksack in all sorts of weather and often I wondered whether I could sustain the same stamina at high altitudes.

Fast forward - I'm back in Kathmandu after an exhilarating but exhausting journey - nursing a sore body and reminiscing at the awesome wonder of the high Himalayas. Plus, I was delighted to have raised over £1,000 for the children's charity, the NSPCC.

Unsurprisingly, on arrival home It took a long time to adjust back to western ways of full and plenty - something that most of the village people in Nepal will never experience. For me, the Everest challenge was the catalyst for a new beginning.

Maybe my birthplace played a part too, its culture subconsciously lodged in my psyche. I was born during the Raj years in Moradabad, Uttar Pradesh, India, 85 miles from the Nepalese border. My parents were from Scottish and English backgrounds but had lived in various parts of India all their lives. They were very happy years, secure and comfortable with a high standard of living. Sadly though, in the aftermath of Partition in 1947 - everything changed. Muslims, Hindus and Sikhs were segregated, with families and friends torn apart in the most brutal way - with horrific consequences. Riots and terrible bloodshed followed with frightening frequency and where there was once peace and unity, only fear and uncertainty prevailed.

At that time we were living in New Delhi and a year later, were present at the incredible funeral of Gandhi attended by over two million people. Then after the departure of India's last Viceroy, Lord Louis Mountbatten in 1948, the unrest escalated causing the British and Europeans to flee India in droves. We left in March 1950. My sister and I were sad to leave our lovely school friends at the Convent of Jesus and Mary where sometimes we used to sit under the trees to do our lessons.

When arriving "home" in a freezing snow-covered England we lived in Essex for a few years before moving to the midlands. I then went on to London. All through my school and college years, my interest in writing remained and to this day I thank my mother for encouraging me to learn shorthand and become a stenographer: a skill which I considered boring at the time, but which has supported me ever since through various secretarial posts, to writing for travel companies in Germany and New York and finally on to journalism. But it was when I met my husband, Martin Tidd, at the Birmingham Post and Mail newspapers in 1973 that life changed quite rapidly.

Launch of our first newspaper

We were married in 1974 and in 1978 we moved to Martin's home ground in Bournemouth with our one year old son and another one on the way! Bravely we took the risk and sank all our savings into setting up our first free-distribution newspaper - The Bugle with a 170,000 circulation. Fortunately, it was a big success and we eventually sold out to the established daily group at the time - Southern Newspapers - who published the Echo across the region. This set us up and eventually we went on to launch various other community magazines and free newspaper titles in Dorset and Hampshire including the Wimborne Magazine (now the Stour and Avon Magazine). In addition we launched into Poole, Ringwood and Christchurch. They were exciting years but times were changing and in 1999 we decided to sell out to Trinity Mirror.

In 2007 I qualified as a Dru yoga teacher and now celebrate the massive health benefits it brings into all aspects of my life. It is a total body science which sets me up for any test life throws at me.

Writing books for children and young adults stretches my mind and takes me to exciting and imaginary worlds which have no borders or boundaries, so I hope my readers will stay with me for the ride!

We are located at:

If you have any queries or wish to make an appointment, please contact us:

To buy a book

To pay by BACS

To pay by PayPal click on Add to cart.

Get social with us