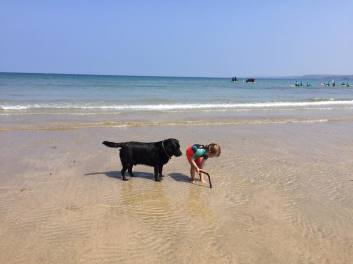 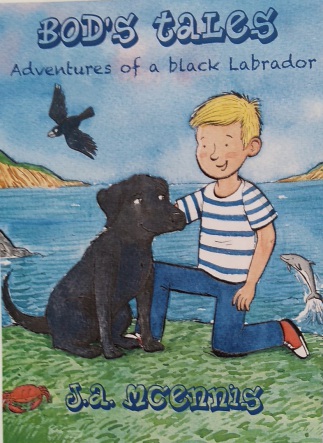 Bod was my son and family's black Labrador who lived in Cornwall. He could be seen most days on the beach in Newquay running in and out of the sea playing with my grandson. These are his adventures - based on true dangers and stories. Here's an extract from the second story.

WHISPERS IN THE WAVES

Strange things were happening across the globe in the autumn of 2013, especially in one Cornish town, the news of which spread like wildfire across the country and then - the world!

At 4.30 am on October 3rd a dense mist swirled in over the Atlantic towards Pendragon Bay blanking out the horizon. It quickly drifted upwards over the cliffs and surrounded an old stone cottage perched on the edge. Inside, the Tremayne family were fast asleep.

Father Jack Tremayne was, as usual, snoring so loudly that his wife Lucy had to shut their bedroom door so that their 9 year old son Archie and their 7 year old daughter, Evie, would not be disturbed. Lucy climbed back into bed and put in her ear plugs. But because of this, she didn’t hear Archie get up and leave the house.

It was not a habit of his, but on this particular morning Archie was woken by Bod who had, with supreme stealth, sneaked upstairs and padded into Archie's room. It was something he never usually dared to do - as upstairs was out of bounds. He scrambled clumsily onto the bed and lay across Archie's chest, licking his face and whining like a puppy.

Archie was surprised and worried at Bod's behaviour.  “What's up boy? I guess you want to go out for a wee or maybe something….. ugh! - even more smelly?” But instead of rushing to the door Bod ran to the window and put his paws on the window sill looking out anxiously. His hackles were up and his ears cocked high.

Then he charged to the door - whoosh! - pawing at it in a frantic sort of a way until Archie opened it. Tail a wag he scampered down the staircase to the front door and waited impatiently - raising one paw in the air as he did when expecting a treat.

Archie was bemused by Bod’s curious behaviour and wondered what was up outside. Bod knew exactly where he wanted to go, and once in the road, pulled Archie along so fast he could hardly hold on to him. He was heading for his favourite place - the beach.

“Calm down boy, calm down! What’s the rush you crazy dog?” shouted Archie. Suddenly Bod stopped dead in his tracks, as if he was listening. Once again his hackles and ears shot up. He gave a deep throaty growl then barked and barked at - what seemed to be nothing at all!

Very few people were about so early and it was still dark and a bit chilly. A refuse lorry rumbled down the hill collecting wheelie bins. Bottles rattled from an approaching milk float. The aroma of bread cooking at the bakers made Archie feel really hungry, but he couldn’t stop; not that Bod would let him!

The hill down to the beach was steep and very soon Archie and Bod were racing down it at about 40 kms per hour! Three more times the dog stopped to listen ears pricked. Archie was not only curious, but a bit worried too. Fortunately he had remembered his mobile phone but noticed that the battery was quite low.‘Better not use it unless it’s urgent,’  he thought.

With just a short flight of steps away from the beach, Archie unclipped Bod’s lead. ‘He’s behaving in a very odd way,’  observed Archie as he watched the Labrador run full pelt up to the ebbing tide and then back again, barking furiously as if he was trying to tell Archie something important. Again, his hackles were up, but he also had a scared look in his eyes.

It was when he bit Archie's sleeve and started to pull him, that Archie sensed there was something very wrong out there - in the sea. Even the gulls were circling, squawking and diving down into the waves in a hectic way.

By 6am, the mist had lifted and the dawn sky over the Atlantic was spectacular - a fiery orange streaked with deep purple which turned the sea into rippling molten gold. The colours were moving and changing from minute to minute and with the brightening sky Archie noticed there was something else out there. It looked big and black and about 100 metres long and rose out of the waves as high as a three-storey building!

“It looks like a submarine!” Archie said excitedly “But what is it doing here so close to the beach? And it’s drifting in closer too!”

Suddenly, Bod went frantic, barking and running in and out of the sea as if he was possessed!

“Easy boy, calm down,” said Archie as he caught hold of Bod’s red collar and stroked him in a comforting way. “Okay, you win. Let’s both go and see what’s out there.” Bod barked back in agreement.

Archie hurriedly stripped down to his boxer shorts and although he was afraid, ran after the dog splashing into the sea. The tide was going out, so Archie was able to wade in quite a way before the sea was up to his waist. "Wahhh! It's so cold!" he kept shouting. But he had to keep going.

The dog was swimming after Archie as fast as he could, but he was getting tired. Every so often Archie had to hold him up for a breather and with every minute, the monstrous shape was looming closer and closer. The Labrador was now more anxious than ever and his whine turned into a high pitched screech; the kind of sound dogs make when they’ve been hurt.

When Archie and Bod were about 10 metres away, Archie saw what the massive black shape was. A huge tail fin, the size of a small house, rose up into the air and came crashing down! This caused a wake which knocked Archie off his feet and into the sea. Bod too disappeared under its force and was nearly carried back to the shore.

Archie opened his eyes under water and nearly choked. Staring back at him

was a black, shiny frightened eye. His heart pounded. Spluttering and shouting he shot back up to the surface. “It can’t be. It just can’t be! It looks like a ginormous whale that’s dead! or nearly dead. I’ll have to get help quickly,” he muttered.

Gently, he reached out and stroked the black, hard, shiny skin of the whale. Shock waves flowed into him from the whale. It was still alive.

At once he made his way back to the beach where Bod was waiting and panting out of breath.

“We must get help. The whale will die soon if he doesn’t swim back out to sea!”

To read the rest of this exciting tale and to reserve a copy of my book of Bod's adventures, just send me an email - auhor@jamcennis.co.uk